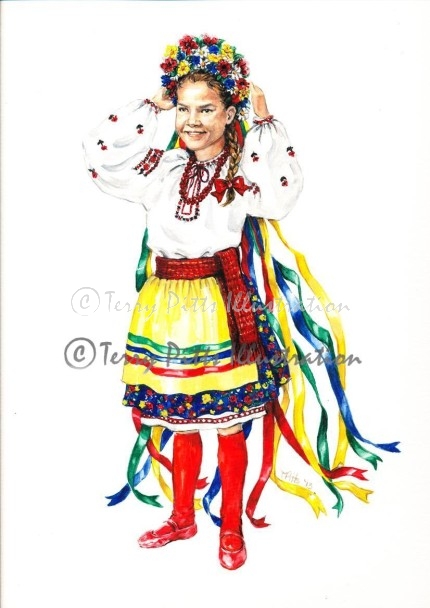 This delightful illustration was originally inspired by my young daughter’s excitement when she proudly placed an adult “Vinok” on her head and began to dance around; the vividly coloured ribbons swirled around her.  The vinok is the flowered wreath dating back to pre-Christian times when it was thought that the headdress would protect girls from evil spirits.  It’s tied to the day of “Ivan Kupala” where women placed their wreaths in water to float away in hopes that the young man who catches the wreath will catch the girl and she would become his.  It was later accepted as a symbol of girlhood and then replaced upon transitioning to womanhood.  In dance, the vinok is proudly adorned with a variety of flowers arranged in a crown with brightly coloured ribbons secured behind the head. (Poltava Region costume)