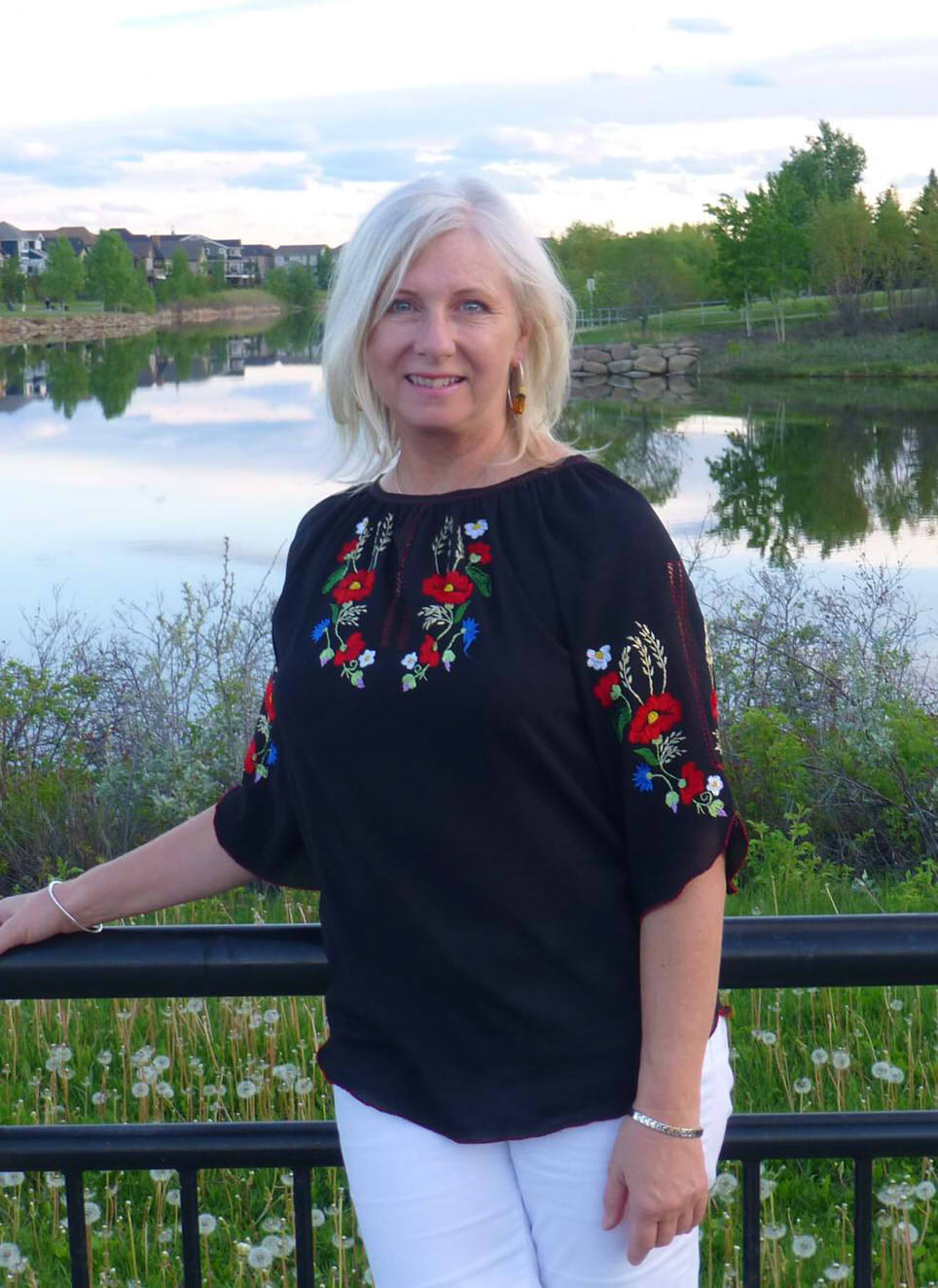 Terry Pitts is well recognized in the field of illustration through the world of fine arts, fashion, history, and costume and a love of her Ukrainian heritage.  Terry is highly skilled in creating detailed illustration for use in a wide variety of commercial artwork including the fashion industry, commercial advertising, children’s books, commercial retail interior décor murals, and costuming for film and theatre.   Her subject matter is as diverse as her mediums and dependent on the subject matter and style.  Terry works with graphite, pencil crayon, pastel, pen, watercolour, acrylic, and oils.  She sells a series of Ukrainian dance art as well works with commissions of portraits and commercial applications.

I am influenced by the inspiration of life’s palette of energy, movement, and creative design.  I express my artwork in an illustrative style drawing from my personal passions.  A life long pursuit of capturing the soul in portraiture and all of its personal characteristics has influenced every aspect of my work.  When interpreting images for fashion of film, I look toward developing the attitude and character, bringing them to life by delving into the very personality to my creations.

Inspired by people, their faces, which reveal an emotion, an attitude, deep-rooted experiences, and more.  I am also intrigued by the creative process and love to see line and form moving through my work in an endless energy. The brush stroke becomes my interpretation of dimension, and depth creating dynamic energy reflected in any subject matter that I interpret.  Fashion has meant an outlet for expression regarding this creativity.  I have developed fashion, interpreted it, and expressed it through the paper and pencil, brush and paint.

A longtime resident of Langley, British Columbia, Canada on the beautiful west coast of British Columbia, Terry Pitts has lived her life surrounded by the impression of the mountains, oceans, islands, and the diversity of culture. Pitts grew up in Kelowna, British Columbia after her family left Edmonton, Alberta in her early childhood. Growing up in a summer resort town left lots of time for beaches, orchards, and outdoor activities. It has left an imprint on her personal life’s passions every since. These included ballet, piano, and drawing. Always a sketchbook at hand recording fashion designs, portraits and murals, she interpreted life’s energy and the personalities that surrounded her. Terry’s illustrative style was developing through pencil drawings, and a sensitive interpretation of portraiture.

Upon Graduating from Kelowna Secondary School, Terry left Kelowna in 1974 to attend Douglas College on the west coast of British Columbia. As illustration was an integral part of her creativity, designing ladies fashion became an inspiring avenue. She holds a diploma in Fashion Design and Clothing Technology from Douglas College (1976) as well as the College’s Student Achievement for that year. Her talents won her acclaim as the top Canadian Junior of 1976 sponsored by Dominion Textiles and the Miss Canada Pageant held in Toronto. Terry featured a women’s line inspired by her Ukrainian heritage on the Pageant night alongside five prominent Canadian Designers. In 2004, Terry designed a collection of ladies cocktail wear which was selected to compete at the Chinese Family Services Canadian Designer Awards in Toronto, Canada.

Her work in the Fashion industry included Designer, Design Assistant, Pattern maker, grader, and garment construction. Freelance opportunities arose to illustrate for a Vancouver Magazine and other local businesses. Her Fashion illustrations became well recognized and sought after.

Currently a member with IATSE local 891 Vancouver Motion Picture Technicians with the film costume department, Terry’s work with the department includes creating conceptual illustrations for costume designers requiring visual examples of characters and costume for the directors, producers and networks of TV and film. She has worked with Vancouver based Film and TV series productions including Twilight Eclipse, This Means War, Red Riding Hood, Battlestar Galactica, Supernatural, and Fallen. Her diverse background and personal passion for history as well as her extensive knowledge of design and construction, supports her expertise in developing accurate and dynamic illustrations that reach the personal soul of the character being portrayed.

Terry’s creative talents, which she considers great gifts, have been a lifelong ambition that has brought her to a life’s philosophy of sharing and training others. She began instructing Ukrainian dance and ballet when her daughter began classes that have extended a career of eighteen years. She has taught in local fashion colleges since 1988. Her subjects of expertise include Fashion Illustration, Jewellery Illustration, Costume History, Textiles, Characteristics of a Collection and Portfolio development. Terry is currently instructing at John Casablancas Institute, La Salle College Vancouver, the Art Institute of Vancouver Vancouver College of Art and Design.

As well as her commercial artwork and instructing, Terry continues to create illustrations for her Ukrainian Dance series that document dance energy and costuming details, continually creating new works, she was the first fashion illustrator to show at the Blackberry Gallery of the Port Moody Arts Centre in October 2006.

A vision of international contribution, Terry Pitts continues to express her creative energy with a story telling quality. Expressing humour as well as sophisticated attitudes, Terry’s intricate qualities of line and colours are intertwined with constant movement and energy.